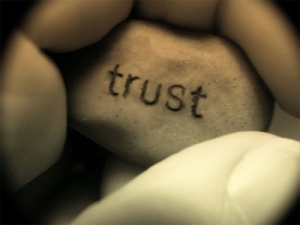 Picture this: You’ve had concerns brought to you about the diversity and inclusion within your agency.  Some of the concerns run deep; they may even be open wounds and you know you need to address them.  You’ve gotten people to the table to talk, even those who felt reluctant to share, people who may have wondered aloud, “Are you really going to do something about this, this time?” or “How are you going to be any different from the last one [director/officer]?” You’re committed, you’re resolute… and you’re a little nervous.  Where do you go from here?

One of the very first steps is to establish trust among and between your committee members.  That’s not an easy task if people have had negative experiences with your organization or with past failed initiatives.  Choosing the right person to facilitate the process is important – s/he needs to have enough authority and influence within the organization to effect changes and commit the organization to them, be steadfastly dedicated to diversity and inclusion, be a respectful communicator and skilled conflict negotiator, and be open and willing to learn from committee members.  If outside facilitators and consultants are chosen to serve in this role, then the committee will still need someone of organizational authority to participate on the committee in a leadership role to ensure commitment to making changes.

When Affirmations formed its Multicultural Advisory Committee, it was designed to address a recent transgression that was rooted in a history loaded with structural and geographic racial inequality.  Those who came to the table were reasonably skeptical of the outcome of any planning meetings.  Trust was a difficult thing to establish.

Everyone’s heard the old phrase, “he can talk the talk, but does he walk the walk?”  Is it all talk, or is there any action behind those words?   In Jocelyn Giangrande’s book “What’s in Your Sandwich?” she interviews Bob Riney, President and Chief Operating Officer of Henry Ford Health System in Detroit, Michigan.  When asked about reputation, he said, “to rebuild a tarnished reputation, it requires 100% ownership.  It helps to go public, stand up and apologize by admitting wrongdoing… it requires your reputation to be more consistent.”

A key element here is “go public, stand up and apologize by admitting wrongdoing.”  So many leaders within organizations refuse to acknowledge any role in creating the circumstances that led to the transgressions.  Paralyzed by fear, public admonishment, and perhaps possible legal recourse, they skip this step and move right into action planning. They avoid taking responsibility and consequently damage their ability to build trust within the community.  In some cases this is a fatal flaw in the process.

Have you ever felt like someone wronged you?  Have you had someone make an honest mistake but with good intentions?  Ultimately, you just want someone to own that.  To say, “Yes, this was wrong.  I did this and let’s make a plan to change it for the future.”

When Affirmations’ Multicultural Advisory Committee began to meet, the pain among community members was palpable.  People needed to be able to voice their hurt, have that pain heard and have leadership acknowledge the truthfulness of that experience.  The committee planned an off-site gathering, in a community member’s comfortable living room, with a potluck-style meal.  For three hours, people shared their hurts and their experiences and Affirmations’ leadership acknowledge the reality and truthfulness of those experiences.

Sitting with people and hearing their lived experiences provides one of the best solid foundations upon which to build.  The fears and pain are real and when fully understood by those in leadership, can provide a substantive base to inspire next steps that are thoughtful, caring and relevant to the concerns that are being shared.  It was only the first stage of building a solid trust base within the Multicultural Advisory Committee at Affirmations – there would be many more to come. But without a solid base, all future efforts would be weak.  This early step in Affirmations’ process was critical in creating an environment of mutual respect, caring and honesty and set the stage for even deeper, equally as honest conversations about transparency and accountability that would come up in future meetings.

Read Part 5: What Does Getting From Committment from the Top Look Like?

This is one post in a multi-part story documenting one historically white organization’s journey toward becoming racially inclusive.  The series seeks to document the challenges and successes faced along the way in an effort to provide a learning tool for other nonprofit organizations who wish to do the same.  For a complete copy of Affirmations’ “Blueprint for Change” visit www.GoAffirmations.org and click on About Us.

Kathleen LaTosch is a consultant specializing in diversity and inclusion planning for nonprofit organizations.  She worked at Affirmations, Michigan’s largest LGBT organization, from 2002-2011 and served as Chief Administrative Officer from 2007-2011.  While there, she was responsible for facilitating a broad-based racial diversity and inclusion initiative.  For more information about Kathleen’s work and availability, email her at klatosch at gmail.com